Only one apartment remaining at Pierre Arrivé House!

22 La Colomberie was opened by Senator Reg Jeune Chairman of the Royal Bank of Canada 12th July 1974. Since that time there have been several occupants of the building. GR Langlois (1991) Ltd purchased the property in 2014 with a view to reviving this tired building to create apartments to the highest standard and giving the exterior a much needed fresh modern look. Initial stripping out works commenced at the end of 2014 with reinstatement and refurbishment starting in April 2015 and completion due in June 2016. The building is being split into a commercial unit on ground floor for a Co-op local food store, floors 1, 2 & 3 comprise of 19 x 1 & 2 bed apartments with a rooftop garden amenity area at 4th floor roof level. 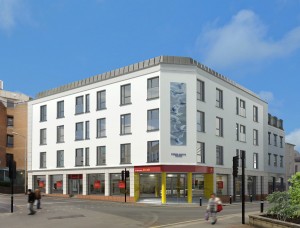 The external envelope of the building is to get a full refurbishment, starting at the roof with insulation and Polyroof waterproof membrane system. The exterior walls are to have a Wetherby render insulation system with the fenestration new replacement double glazed aluminium windows. Internally you can expect a modern look, from the high finish of Oak veneered doors with chrome ironmongery to the wood look Camaro Vinyl plank flooring throughout the apartments. Bathrooms will include wall tiling, large modern showers with glazing screens and fixed chrome deluge overhead shower heads sanitary ware will be modern Villeroy and Boch with Bristan taps. Modern style kitchens by Impuls make a fantastic contemporary look along with function and will include appliances; electric oven, hob, fridge/freezer and dishwasher. The apartments will be served with a lift and stair access that will be surrounded by glass Reglit curtain walling. Dry storage with bike racks will be provided on the ground floor of the building for owners. Outside amenity space will be provided on the roof at fourth floor for all residents, some apartments will also have additional private balconies or terrace areas. 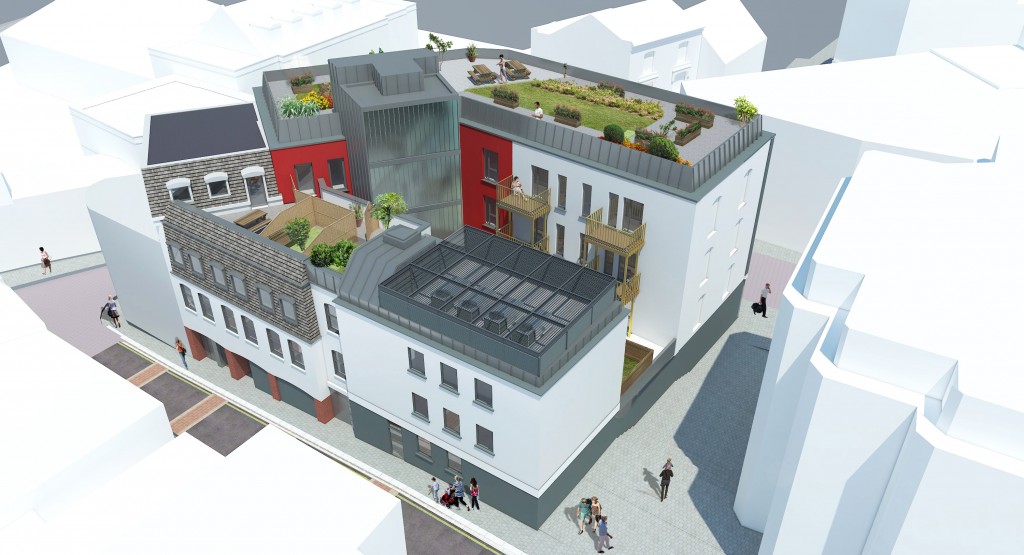 Our percentage for art includes a dove theme which gives reference to La Colomberie which is one of the oldest streets in St. Helier. The theory is that the street name originally derived from the dovecote or ‘Colombier’ at the old La Motte Manor, which once stood on the corner of St James’ Street and Grosvenor Street, the artwork we have selected reflects this history.

Jersey is lucky enough to have some very gifted local artists, the stainless steel etched doves hanging from the north east corner of the building has been designed and crafted by Nicolas Romeril.

The name of the building is in memory of a local man forgotten in history who was killed just before the battle of Jersey was about to start.

On the morning of 6 January 1781, the French troops invading the Island had landed at La Rocque in the early hours of the morning. The route into St Helier was so sparsely populated that the troops were able to march all the way into town without being detected. As the soldiers continued on down La Colomberie towards the Royal Square, Pierre Arrivé who lived in the vicinity of Snow Hill spotted the French troops, he tried to raise the alarm however his action alerted the invaders who bayoneted him to death; he was the first casualty of the Battle of Jersey.